In Hans Christian Andersen’s fairy tale The Emperor’s New Clothes an emperor who cares too much about clothes hires two swindlers who promise him the finest suit of clothes from the most beautiful cloth. This cloth, they tell him, is invisible to anyone who was either stupid or unfit for his position. The Emperor cannot see the (non-existent) cloth, but pretends that he can for fear of appearing stupid; his ministers do the same. When the swindlers report that the suit is finished, they dress him in mime. The Emperor then goes on a procession through the capital showing off his new “clothes”. During the course of the procession, a small child cries out, “But he has nothing on!” The crowd realizes the child is telling the truth.

In the 2008 US Presidential elections fiction has sadly not become reality. 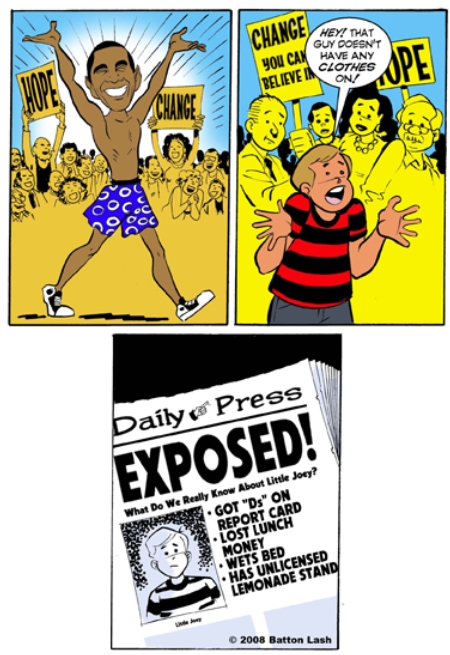 Joe “The Plumber” Wurzelbacher has certainly and painfully found this out. Rather than the Obama supporters realizing the truth about their messiah – to them he is Hope and Change, the messiah for a new America – they attacked Joe, as a person, as a man, and as an American in any way possible.

This entry was posted on Wednesday, October 22nd, 2008 at 6:00 am and is filed under 2008 Election, Society. You can skip to the end and leave a response. Pinging is currently not allowed.

The Leftists and their MSM surrogates are hell bent to destroy Joe “The Plumber” Wurzelbacher. While I’ve found no evidence that any of them have actually called for his murder, they have done their best to smear him, discredit him, and make his life a misery. Because he – a normal blue collar American, with all the faults attendant upon on that status – asked Sen. Barack Obama a tough question.

Jedi Will (jediwill1974) has a video that sums up the situation better than I can.

H/T to Steven Shores at Regeneration

Joe’s not going away people. Joe is every normal, hard working American. When the Left, the Obama campaign, and the media attack Joe like they have done they’re attacking each and every one of the rest of us as well.

They are saying, “How dare he ask a question like that!”

They are saying, “If you make Obama look bad, we will punish you. We will make you pay.”

Is this what any American wants to vote for? Have we come so far down the road to policing thought that we feel the need to attack those who question candidates for political office?

Does it seem strange to anyone besides myself that the Left, the Obama campaign, and the media attack Joe the Plumber for merely questioning Obama but defend Ayers for engaging in terrorism as a form of protest against the US government?

This entry was posted on Friday, October 17th, 2008 at 8:23 pm and is filed under 2008 Election. You can skip to the end and leave a response. Pinging is currently not allowed.