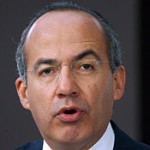 Regarding the Administration’s decision to send 1,200 National Guard servicemen to the US Southern border, the Government of Mexico trusts that this decision will help to channel additional US resources to enhance efforts to prevent the illegal flows of weapons and bulk cash into Mexico, which provide organized crime with its firepower and its ability to corrupt.

This entry was posted on Wednesday, May 26th, 2010 at 4:16 pm and is filed under Politics. You can skip to the end and leave a response. Pinging is currently not allowed.