“Climate professor” Chris Turney assembled a tax-payer funded Global Warming propaganda junket to the Antarctic which ended up evidencing the massive expansion of Antarctic ice in the most ironic and visceral manner as their ship become stuck in the polar ice followed by the Chinese icebreaker sent to rescue them also becoming entrapped in the same ice. 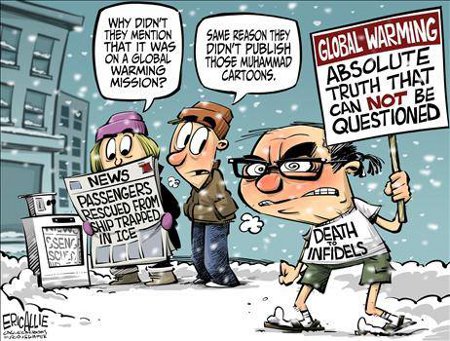 I suppose fortunately, both the global warming expedition vessel and the Chinese rescue ship trapped in Antarctica have exploited cracks in the ice to break free and steam toward safety.

Don’t expect any in-depth analysis of this and its meaning from the Lamestream Media though. They’ve been studiously avoiding mentioning that Turney’s expedition was a Global Warming propaganda trip, which set out to prove climate change, ended up trapped in the very ice that they sought to prove had melted. This is because they know that it is no wiser to antagonize the Warmists than it is to antagonize the Islamists.

This entry was posted on Wednesday, January 8th, 2014 at 10:51 am and is filed under Politics, The Environment. You can skip to the end and leave a response. Pinging is currently not allowed.