Hunters like myself have recurring issues with the Eco-fascists, animal rights activists, and the various worthless fools who, when they see a dear, see Bambi instead of venison.

OK, I can force myself to be accommodating sometimes. Let’s compromise and save deer by declaring open season on vermin – the two-legged kind. 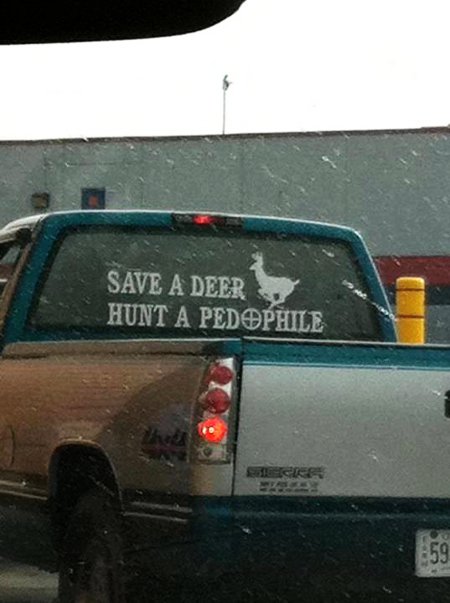 Save a Deer. Hunt a Pedophile

I could get behind that idea 100% as I’d much rather exterminate pedophiles than harvest deer. Doing so is not only more sport, but provides a greater public service than thinning the deer herds.

And for the bleeding-heart Liberals who will read this and bemoan “vigilante justice” – This is America; vigilantism is not possible in this country because we, the People are the law. The police, prosecutors, and judges are nothing more than people we hire to enforce it for us.

If any of these police, prosecutors, and judges took exception to Americans hunting down and exterminating pedophiles, we the People would be within our God(s)-given rights to declare each and everyone of them accessories after the fact and kill them as well.

I think you’ll find though that most of them would be hunting alongside of the rest of and would take as dim a view of any Liberals’ “interfering with the prosecution” as I would. 😉

This entry was posted on Saturday, June 23rd, 2012 at 10:12 am and is filed under Society. You can skip to the end and leave a response. Pinging is currently not allowed.

7 Responses to “Open Season On Vermin”