The Source Of Rage

The picture below perfectly sums up a large part of the fear and resultant rage against the politicians in the federal government that is being expressed by the American people in the form of the Tea Party movement. 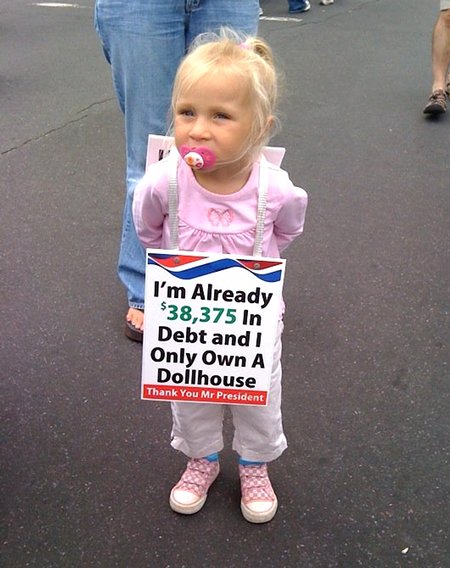 No; it’s not about the POTUS’ race, despite the Leftists and their minority tenants near-constant mendacious screeds to that effect. It’s about President Obama and his cabal Liberals bankrupting America and stealing the future from our children and our children’s children.

Remember that our progeny must live and die in the world we create for them, and that it is a parents holy duty to protect their children from any and all who would prey upon them.

The American people, by and large, love their children and wish for them to have betters lives than we have had. Only a relative few groups – mostly exilic groups sunk in crime, drug addiction, family dissolution, nihilism, and the resultant multi-generational poverty – try to indoctrinate and/or coerce their children to live in the same circumstances as they have rather than to move out, move on, and better themselves.

The source of the American people’s fear and rage is not racism; it’s a human parent’s natural response to anything or anyone who threatens their children or the children’s future.

Only two questions remain: how far will Americans have to go to protect our children and how far President Obama, Harry Reid, Nancy Pelosi, and their coterie of Liberals will go to continue preying upon our children and robbing them of their future liberty and opportunity to succeed by their own efforts, will, and ability?

This entry was posted on Thursday, April 8th, 2010 at 8:54 am and is filed under Politics. You can skip to the end and leave a response. Pinging is currently not allowed.

One Response to “The Source Of Rage”