On Wednesday, February 18, 2009, the New York Post published a cartoon by the famed cartoonist Sean Delonas showing two police officers, one with a smoking gun, standing over the presumably lifeless body of a bullet-riddled chimpanzee. The cartoon appears both on the New York Post website and on page 12 of the Wednesday edition of the paper. 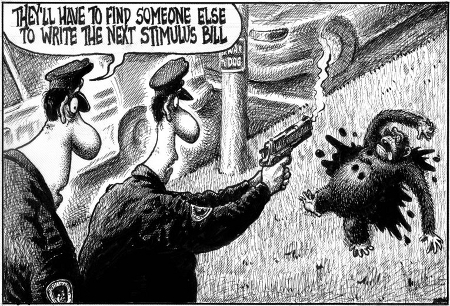 Delonas’ cartoon immediately sparked outrage from the Black community and many Liberals. The cartoon was denounced as being horribly racist because it portrayed President Obama as an ape and because it showed White policemen with firearms.

Alright – I can accept that the Black community and US law enforcement have long had an adversarial relationship and that depictions of a “shooting situation” involve White police officers might incite nervousness and anger among some of them. I can also appreciate that Blacks were depicted as being less than men for a long time and that various simian comparisons were prevalent in previous years.

The problem is that President Obama wasn’t depicted or mentioned in the cartoon, nor did President Obama write the abomination that is commonly called the Stimulus Bill. Congressional Democrats – almost all of whom are White – wrote that particular piece of legislation, and it’s been publicized enough that few people in America would believe otherwise.

I often find myself comparing Congress to a yammering pack of monkeys who spend their days screeching and throwing feces at each other and at anyone else who is nearby.

So what has happened is that the people who congratulated themselves on electing America’s First Black President saw some imagery that could – with a change or twist in context – be taken as racist and they got very, very upset. This is what happens when people define a political candidate by his race; it allows people to project their own racial sensitivities upon that person and re-frame any direct or implied criticism of that individual as a racist attack.

Of course the President of the United States has already been specifically portrayed as a chimpanzee and as other things that are equally insulting and hurtful in their own ways.

That was OK though, as was developing a cottage industry marketing tee-shirts, mugs, posters, and other items that visually insulted or defamed President George W. Bush. There was little or no outcry over that behavior – certainly none from the Liberals or Blacks.

Was Sean Delonas’ cartoon particularly funny? No, I didn’t think so. It was a cheap and overly contrived blending of two headlines stories, the recent chimpanzee attack and the Stimulus. It has become significant though because it highlights the lingering rage, bitterness, and insecurity of America’s Blacks, as well as the Liberals eagerness to paint any dissent from President Obama’s agenda as being racist.

By the current imposed standard I’m sure that the NY Post’s current (Thursday, February 19, 2009) lead story will draw even more outrage than Delonas’ cartoon has done. 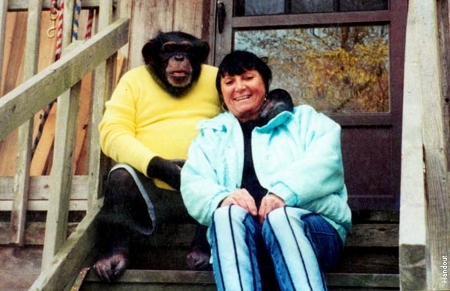 Pri-Mates – The Happy Couple: Bizarre Love of Gal and Ape

This entry was posted on Thursday, February 19th, 2009 at 1:16 pm and is filed under Politics, Society. You can skip to the end and leave a response. Pinging is currently not allowed.

12 Responses to “The Racist Chimpanzee”