The American people, fueled by the Media’s heavy and biased coverage – have made a very big issue out of Obama selecting Pastor Rick Warren, who advocate for Proposition 8 to perform the Invocation at Obama’s January 20th Inauguration.  In the wake of California’s passage of Proposition 8, Homosexuals and their allies have done much to keep this topic in the forefront of our nation’s consciousness.  What has been largely ignored by the media, and therefor what resides outside the ken of much of America is that there are two (2) religious rites at an Inauguration – the Invocation and the Benediction.

I find it quite telling and quite sad that only the Invocation is considered newsworthy, and that only because of the controversy surrounding Obama’s selection of Pastor Warren to perform. Obama’s choice of the priest to deliver the Benediction should have gotten a lot more coverage than has so far. 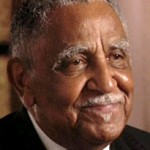 President-elect Barack Obama has selected Rev. Joseph E. Lowery, a stalwart of the civil rights movement and co-founder of the Southern Christian Leadership Conference (SCLC) to perform the Benediction at Obama’s Inauguration.

The 87-year-old retired pastor has been a stalwart of the civil rights movement. For over a half century Lowell as been in the front lines in the fight for racial equality.

In the 1950s – prior to much of the more publicized Civil Rights movements – Lowery headed the Alabama Civic Affairs Association, an organization devoted to the desegregation of buses and public places.

In 1959, Lowery’s property was seized in along with that of other civil rights leaders by the State of Alabama as part of a libel suit filed by the Montgomery, AL police department. It took four years and U.S. Supreme Court ruling to reverse the lower courts decision.

Reverend Lowery has repeatedly advocated for LGBT rights, considering them nothing more or less than normal civil rights, and supports same-sex marriage as one of those basic rights that all Americans are inherently owed.

Gods in their Heavens! Lowery led the Selma March at MLK’s direct request in March, 1965. Go look up “Bloody Sunday”!

It’s truly sickening that the MSM in its quest for ratings and its fervor to denounce Conservatives has willfully ignored Rev. Lowery’s selection to perform perform the Benediction at President-elect Obama’s Inauguration.

Edited – January 20, 2009: The full transcript of Lowery’s Benediction can be found here.

This entry was posted on Saturday, December 20th, 2008 at 11:18 am and is filed under Politics. You can skip to the end and leave a response. Pinging is currently not allowed.