South Carolina has problem. Eric Holder’s DoJ, through its Civil Rights division, announced that it would block a new South Carolina law that required voters to show a photo ID when casting a vote.

In a letter to South Carolina’s government, Assistant Attorney General for Civil Rights Thomas Perez called the state law—which would require voters to present one of five forms of photo ID at the polls—a violation of Section 5 of the 1965 Voting Rights Act. Overall, he noted, 8.4% of the state’s registered white voters lack photo ID, compared to 10% of nonwhite voters.

Identifying SC’s problem is quite easy. It’s not the law and it’s not the ID requirements. It’s Obama’s boy, Eric Holder’s racism and the Obama Regime’s desperate attempt to change South Carolina’s active electorate into something they perceive as more favorable to Obama and his Liberals. 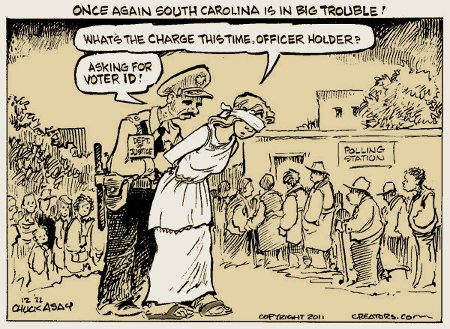 8.4% of SC’s White voters vs. 10% of non-White voters lack any of the forms of ID accepted under the law, one of which is provided free of charge – not exactly a gaping chasm, even by the false standards of disproportional effect. Yet Eric Holder and his cronies think it’s worthy of their attack.

Let’s ignore that in 2005, the DOJ approved a Georgia law with the same provisions and protections as the one  Holder blocked for South Carolina. That was under President Bush and Alberto R. Gonzales was the US Attorney general. A White POTUS and a Latino AG might be thought of to have differing sensibilities and internalization of history than a Black POTUS and a Black AG.

There’s no similar reason, however, to ignore the SCOTUS’ 6-3 decision in Crawford v. Marion County Election Board which stated that an Indiana Voter ID law (SEA 483) – like Georgia’s, fundamentally the same as South Carolina’s – did not present an undue burden on voters.

The relevant burdens here are those imposed on eligible voters who lack photo identification cards that comply with SEA 483. Because Indiana’s cards are free, the inconvenience of going to the Bureau of Motor Vehicles, gathering required documents, and posing for a photograph does not qualify as a substantial burden on most voters’ right to vote, or represent a significant increase over the usual burdens of voting. The severity of the somewhat heavier burden that may be placed on a limited number of persons—e.g., elderly persons born out-of-state, who may have difficulty obtaining a birth certificate—is mitigated by the fact that eligible voters without photo identification may cast provisional ballots that will be counted if they execute the required affidavit at the circuit court clerk’s office.

Valid neutral justifications for a nondiscriminatory law, such as SEA 483, should not be disregarded simply because partisan interests may have provided one motivation for the votes of individual legislators.

No – the only point that the Obama Regime has in their assault upon South Carolina is Obama’s handlers’ use of Holder’s and Perez’s racism and grievance-mongering in the hopes of “getting out the vote” among the non-Whites in SC. This is pure political campaigning with nothing but a vaguely peripheral and tangential involvement with civil rights.

This entry was posted on Tuesday, January 3rd, 2012 at 11:41 am and is filed under 2012 Election, Politics. You can leave a response, or trackback from your own site.