America is still, despite supposed economic gains, dealing with an unemployment rate hovering around 9%. It’s only a matter of time before this becomes truly untenable and society adjusts and becomes willing to entertain more drastic and reactionary measures to improve those deplorable employment figures. 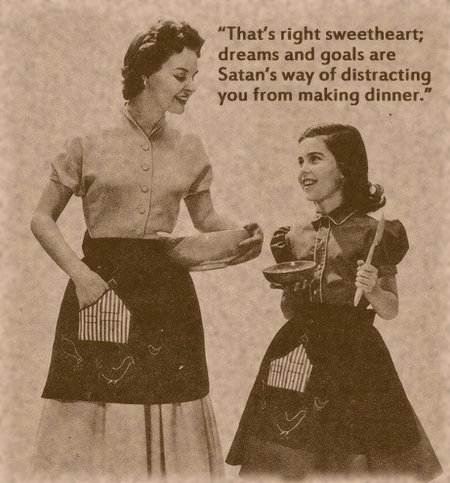 Hie Yourself Back To Yon Kitchen, Wench

Forget the race-baiting by Liberal proponents by illegal immigration; it’s not the immigrant population, illegal or otherwise, that will bear the brunt of these “corrective” measures. It will be American women.

Women comprise 46.8% of the total US labor force – 13.46% above the global average of 40.5%. Therefor, if they can convince or coerce 19.23% of those women to leave the workforce America’s official unemployment numbers would be 0%, though a more realistic goal of getting 12.8% of the currently working women out of the workforce would net America an approximate 3% unemployment which is considered far healthier than 0% and would be easier to achieve.

Even just culling enough female workers to bring America down to the current global average would drop our nation’s unemployment figures down to around 6 – 7%, which is not too far above the the US average (5.65%) since 1948.

What makes this prediction most likely and most dire is that it can be actualized without the conscious effort or machinations of any individual or group. It only requires that people do not actively work against various economic and societal pressures that will achieve this resulting reduction of women in the workforce.

Don’t make the mistake of thinking that I think this is a good thing.  I may not have the knee-jerk antipathetic reaction of the Feminists but that doesn’t mean I like what see coming.

This is, if my prediction is correct, going to be brought about “organically” and due to a number of unrelated pressures and goals.

One of the stronger, or at least more noticeable, forces that is going to be luring women out of the workplace is religion, specifically fundamental and quasi-fundamental Protestant Christianity. Those varieties of Christianity – like it or not, the de facto faith and sets of sects within America – is steeped in assigned gender roles that place women squarely in the home, as opposed to the workplace.

As the times grow tougher and people find less solace in their material situation people almost inevitably turn to or, as is more often the case, return to spirituality for that solace. That’s going to lend a greater audience to the preachers who tout the not inconsiderable but also not without cost benefits of what are called Traditional Family Values.  Some portion of the women in that greater audience will choose to become homemakers.

America’s public school system is in shambles and both the depressed economy and deficit rectifying measures are likely to only make that trend accelerate downward. This is, perforce, going to make home schooling more attractive to a larger number of families. What is now largely the bailiwick of affluent urban elites and the Religious Right may well see larger acceptance among the population at large.

By and large, if history is any indicator, it will be women who end up choosing to stay home to educate their children. This will pull women out of the workforce, though I believe that it will have more effect upon women returning or seeking to return to the workplace as opposed to explicitly pulling currently employed women out of it.

Increasingly heavy, complex, and arguably onerous regulations – ironically coming from the “Nanny State” contingent – on diet, licensing, children per daycare worker, etc.. are poised to cause many daycare centers and professional babysitters to either go out of business or raising their prices past the point where many families can afford their services.

The effects of this will be compounded geometrically if the States, due to ongoing massive budget shortfalls, have to curtail or eliminate their various respective child care subsidies for lower income families.

This will, if the phenomenon trends upwards, have the dual effects of removing those predominately female daycare workers from the employment rolls and causing many mothers to either choose to or have to leave the workplace in order to care for their children.

When unemployment is high, especially if it has stayed high for any length of time, employers tend to demand more from- and are less accommodating to their workers. This is due to the natural human trait of greed and the necessities of keeping the company afloat in harsh and hazardous times.

Women tend to be negatively impacted by these increased work demands more than their male counterparts, which will end up driving a certain percentage of them out of the workforce, either through termination or through “voluntary” attrition.

This won’t be a “perfect storm” of events that pulls women out of workforce. It will be, in my opinion, more like a widespread low pressure zone with a number of unrelated or only slightly related “storms” within it.

It’s not a single cause, binary toggle. It’s not just going to be Christian mothers dealing with unavailable or more expensive daycare, poor and/or dangerous public schools, and jobs that keep demanding more and making fewer allowances for their familial needs who are going to be affected if the current economic situation continues unabated. Other women, perhaps a majority of them, are going to be hit by one or more of these forces and trends.

After reading my opinion of the forces that will come to bear upon working women in America do you really believe that, if the job market and the economy don’t recover, at least one in eight (12.5%) women will leave the workforce or, in the case of young women not enter it in the first place?

This entry was posted on Wednesday, January 5th, 2011 at 10:51 am and is filed under Politics, Society. You can skip to the end and leave a response. Pinging is currently not allowed.