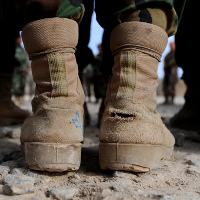 Yes, it’s sad to say but boots on the ground are boots on the ground and there’s no intrinsic difference to the situations based solely upon national borders and which uniforms the men and women wear.Â  The same measures need to be taken; the same mistakes will be made; and the same attitudes will grow and fester.

This entry was posted on Thursday, September 3rd, 2015 at 12:12 pm and is filed under Politics, Society. You can skip to the end and leave a response. Pinging is currently not allowed.