The Fruits Of Poison

This was my original post – to my shame for trusting a MSM source:

Sen. Obama invoked the race card with his “dog whistle” applause points about how they GOP would use his race against him.

— Sen. Barack Obama
This particular quote is from a Jacksonville, FL rally.
Similar statements were regularly used before and after this one.

Obama’s supporters and the media in general quickly jumped on this tacit endorsement of using race in the Presidential campaign and have done they’re best to foment racial hatred in the days that followed.

The racial hate that Obama engendered has finally bore its poisonous fruit:

From WTAE (an ABC affiliate):

A 20-year-old woman who was robbed at an ATM in Bloomfield was also maimed by her attacker, police said.

Pittsburgh police spokeswoman Diane Richard tells Channel 4 Action News that the victim was robbed at knifepoint on Wednesday night outside of a Citizens Bank near Liberty Avenue and Pearl Street just before 9 p.m.

Richard said the robber took $60 from the woman, then became angry when he saw a McCain bumper sticker on the victim’s car. The attacker then punched and kicked the victim, before using the knife to scratch the letter “B” into her face, Richard said.

Richard said the woman refused medical treatment after the assault, which happened outside the view of the bank’s surveillance cameras.

The robber is described as a dark-skinned black man, 6 feet 4 inches tall, 200 pounds with a medium build, short black hair and brown eyes. The man was wearing dark colored jeans, a black undershirt and black shoes.

The Obama-Biden campaign released a statement, commenting on the attack. The statement said “Our thoughts and prayers are with the young woman for her to make a speedy recovery, and we hope that the person who perpetrated this crime is swiftly apprehended and brought to justice.”

So a young women is attacked by a Black man and suffers humiliation and possibly permanent facial scarring because she support McCain.

The elections are only a few days away. Please think about this. When you cast your vote for President, you are not just electing a President; you are voting in agreement with that candidate’s supporters. Are the people who think these videos are funny the ones you want to empower?

Please review the picture below: 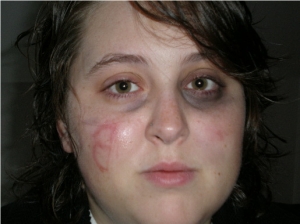 Unless her attacker was dyslexic – a possibility but a doubtful one – it looks like she carved that “B” into her face herself!

My wife-in-all-but-law, Eve and I tested this out in the bathroom mirror after I got access to the photo. We used eye liner and drew “B’s” on the right side of her face, both her doing it in the mirror and my doing to her.  When she did it to herself in the mirror it matched the photo. When I did it to her it was reversed from what is shown in the image shown above.

This is appears to the most pernicious and vile sort of hoax. I hope – if my tests prove to be indicative of the the truth – that there’s a very special place in Hell for this woman. Racial tensions are high enough due to the bullshit perpetrated by the MSM without stupid or just plain evil people adding to it.

Addendum: Police report that the  woman has admitted to concocting this hoax.

This entry was posted on Thursday, October 23rd, 2008 at 5:28 pm and is filed under 2008 Election. You can skip to the end and leave a response. Pinging is currently not allowed.

11 Responses to “The Fruits Of Poison”