In Defense Of Teachers

I’ve posted before about why teachers bear the brunt of America’s anger over the utter and complete failure that is euphemistically and mendaciously called the American educational system. Let us not forget though that, despite the fact that so many teachers deserve Americans’ scorn and loathing, they and the government’s system are not alone in culpability for this disgrace. 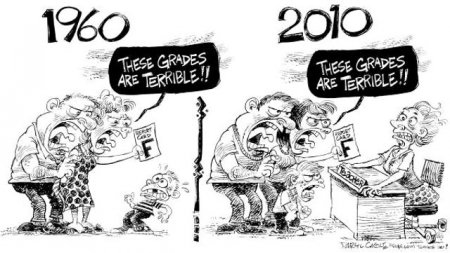 50 Years of Failure Led To Destruction

50 years of “sparing the rod” has spoiled not only whole generations of children, it has has brought the nation’s school system to the point of uselessness as anything other than a means to warehouse children during the day hours.

It is difficult to believe that America’s “educational” system could have reached the nadir that it has if the sires and dams – can one truly call them parents? – of the children within it had actually shouldered their responsibilities and held themselves, their children, the schools, and the government accountable rather than abrogating their duties in favor of selfish and self-centered pleasures.

This entry was posted on Saturday, June 4th, 2011 at 9:44 am and is filed under Society. You can leave a response, or trackback from your own site.