Which Ones Are Bad?

The Liberals and Progressives, their minority tenants, and also a disturbing large number of others who normally side with America are making a lot of angry noises about any and all plans to restrict Muslim entry into the US.

In the case of the latter group, it’s largely just anti-Trump hysteria and, hence, isn’t as intrinsically dangerous as the ideology of the Left and the minorities. In all cases though, the people screaming are forgetting to ask themselves one question… 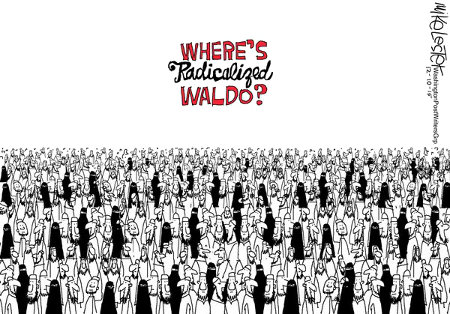 Of the 10s of thousands – potentially 100s of thousands – of Muslim immigrants and refugees that some want to allow within America’s borders with little to no oversight or restrictions how many are “radicals?” Who knows? It’s not like we can tell by looking at them. Yet, the most conservative estimates say that just one third of the world’s Muslims support the most violent forms of jihad – even just under one fifth of the Muslims already in the US admit to doing so – and some 2%-3% will actually actively take part in it.

So, faced with tens or hundreds of thousands of utterly foreign faces whose languages and cultures are both alien to- and often antithetical to the American norm, how can we protect ourselves and our children from both the third that will support jihad and the small percentage that will carry it out inside America?

This entry was posted on Saturday, December 19th, 2015 at 7:43 am and is filed under Politics, Religion, Society. You can leave a response, or trackback from your own site.