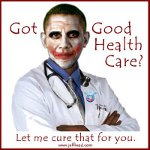 The Liberals were warned – loudly and repeatedly – by Americans that there would be unhealthy consequences from forcing the abomination that is ObamaCare upon the people. Of course the Liberals, indoctrinated into a neo-Socialist cult of anti-Americanism and anti-Capitalism, ignored these warnings and supported the Triumvirate of Evil, Obama, Pelosi, and Reid in their quest to quasi-nationalize 1/6th (16%) of the US economy.

In the wake of Obama, Pelosi, and Reid unconstitutionally enacting ObamaCare through a series of only marginally legal methods, it didn’t take long at all for Americans’ common sense wisdom to be proven right and our dire predictions to become horrid reality.

So the immediate unhealthy consequences of the filth trying to rule America’s foray into Health Insurance Reconstruction is that individuals and small businesses, children, and poor people – the three groups mendaciously touted by Obama and his coterie as the primary beneficiaries of ObamaCare – are all facing either significant increases in health insurance costs or a loss of coverage et al.

As we approach the 2010 Congressional Elections and later the 2012 Presidential Elections it is critical for Americans to remember that these are unhealthy consequences of ObamaCare, not unintended consequences. Obama, Pelosi, Reid, and all their followers knew what they were doing and were more than willing to sacrifice the health hand very lives of Americans in order to reach their goal – Socialized Medicine aka a Single Payer System.

This Is Just A Transitional Step Towards A Single-Payer System

These vermin knew that enacting the legislation contained within the final version of Patient Protection and Affordable Care Act would force health insurance providers, which operate at a mere 3 – 4% profit margin, to raise rates and reduce coverage to high-risk clientele or go out of business entirely, leaving tens of millions of American men, women, and children without health insurance.

This was their plan. Drive the health insurance industry to either make unpopular rate increases and service cuts or go out of business. Either way it would enable the Triumvirate of Evil to step in and takeover or supplant the industry. It has always been their intent to manufacture this crisis and then capitalize upon it.

Know this – any deaths that result from this, especially the deaths of any American children, are on the hands of Obama, Pelosi, Reid, and their Liberal followers. They need and want people to die.

These creatures are a clear and present danger to the health, well-being, and very lives of American men, women, and children. They are more than willing to kill among us in order to “fundamentally change” the nation that they so despise.

What’s even worse is that the Liberals won’t be satisfied with killing American children. The many children who survive will be de facto “indentured” to foreign powers in order to pay off the Triumvirate of Evil’s multi-trillion dollar deficit spending spree.

Remember all this in November and use the ballot box to enact real change, positive change, change that will start the restoration of America. We, the People must stand shoulder-to-shoulder and cast down these would-be despots with these elections.

If we can’t stand strong and united and defeat the enemies of America using the ballot box then it will be necessary for each American patriot’s conscience to dictate what actions he or she will take to preserve and defend our nation. It’d be far better for all if it didn’t come to that.

This entry was posted on Sunday, October 3rd, 2010 at 6:43 am and is filed under 2010 Election, 2012 Election, Politics. You can skip to the end and leave a response. Pinging is currently not allowed.