From Messiah To Mess

Oh how the “mighty” have fallen, tripped up and cast down by the harsh, unforgiving nature of reality. Obama, the Great Black Hope, was heralded as a messiah in 2008. Now, a mere six years later, the boy is just a mess – a tar baby that even Democrats steer clear of. 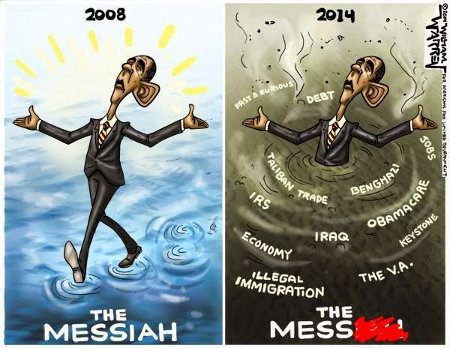 Obama – From Messiah To Mess

It’s up to we, the People to remind the Democrats that they’re already stuck to this particulary political tar baby and already coated in- and reeking of the mess that is Obama and his agenda. Hellfire! Even Obama has decompensated enough to petulantly rant this fact.

I am not on the ballot this fall. Michelleâ€™s pretty happy about that. But make no mistake: these policies are on the ballot. Every single one of them.

It time to take corrective action and cleanse the federal government of the feculent mess that has befouled it for six long, painful, and horrifically destructive years.

This entry was posted on Tuesday, October 14th, 2014 at 8:36 am and is filed under 2014 Election, Politics. You can skip to the end and leave a response. Pinging is currently not allowed.