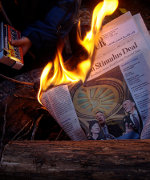 There’s a fair amount of discussion lately about how the internet has supplanted printed media as a news medium and how this is affecting newspapers across America.

There’s also been discussion about these newspapers moving to “paywall models” for their digital content. Whether or not such schemes will allow any individual newspaper to survive is, I believe, more upon who their target audience is than upon any other factor or or factors.

So who reads which newspapers?

NOTE: Variants of this list / joke have been circulating since at least 2005 but this version came from Fellowship of the Minds.

So which group, if any, do you think will find paying for a digital subscription to their newspaper to be of value? The movers and shakers,the would-be movers and shakers, the Frustrati, or the prurient masses seeking enjoyment through Schadenfreude?

Personally I think the newspaper, such as it is, with by far the best chance of having a salable digital market is The National Enquirer. It has a large consumer base, none of which want to be seen purchasing it! 😉

This entry was posted on Friday, March 18th, 2011 at 8:17 am and is filed under Humor, Society, Technology. You can skip to the end and leave a response. Pinging is currently not allowed.