Iranian actress and musician, Golshifteh Farahani has been exiled from Iran because she posed nude for the French magazine, Madame Le Figaro.  She was contacted by representatives of the Ayatollahs’ Islamist regime earlier this week and told not to try to return to Iran from France. 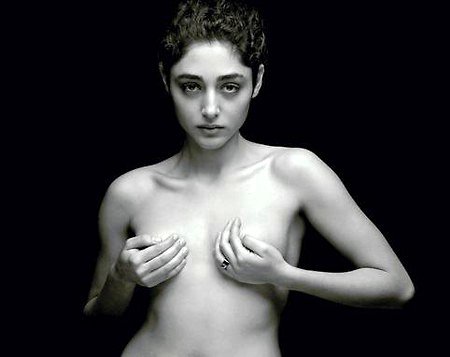 This Got Golshifteh Farahani Exiled

Other Iranian officials were even harsher, such as one assigned to Egypt, who said, “I think it is disgusting and she should be put to jail or worse for this crazy idea. Women here are treated with utmost respect.” So being exiled might be the least reprisal against her, given how Muslims deal with women who defy them.

So Golshifteh Farahani is probably much better off and far safer staying out of Iran anyway. The best Ms. Farahani or any women who refuses to accept slavery can expect from the Muslim vermin is to be arrested, repeated gang-raped and sodomized by the police, and eventually executed by either being whipped to death or stoned. Given Ms. Farahani’s beauty, the Iranian courts would drag out her case so as to give the largest number of the police and Basij a turn on her.

By taking part in these photo shoots the people taking part wish to demonstrate their redemption from these taboos by the way they act and talk.

The objective is to liberate their soul and bodies at the same time. As long as an individual has no power iver her or his body and their soul does not have the command of the way they wish to think, then they do not have a true freedom.

Although I do not think looking at the nude photo of another human may have an attraction, but it is certainly far more enjoyable than looking at the fully covered and burqa and hejab wearing body of a woman who has been wrapped and imprisoned by her man. So much for not looking at women as sex symbols as the fundamentalists want us to believe!

I was say that Golshifteh Farahani is a woman of beauty, grace, talent, and passion. As such, she had no “acceptable” place the current Islamist theocracy of Iran and it was only a matter of time before she could no longer return to Iran, be it do to being exiled or being under the death of rape, mutilation, and death at the paws and diseased organs of vermin in that “country.”

There is a final and permanent solution to the Islamist Question though. It just requires that Mankind remove the male vermin in Iran in toto, or near enough to that, and accept those Iranian women who wish into there own nations and bloodlines. There are enough educated women in Iran that we could leave the country in the hands of those who didn’t wish to leave with us after the cleansing.

This entry was posted on Saturday, January 21st, 2012 at 1:05 pm and is filed under Politics, Religion, Society. You can skip to the end and leave a response. Pinging is currently not allowed.