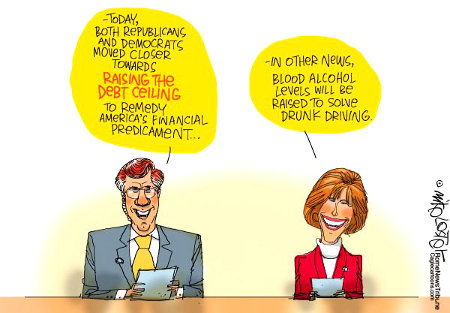 The editorial cartoon depicted above sums this up perfectly. Raising the federal government’s debt ceiling is no closer to being the correct answer to their spending issues than raising the legal limit for blood alcohol is for reducing incidents of drunk driving.

Be assured though that the debt ceiling will be raised once again – and again, and again, and again until our creditors finally cut us off – because both the waning “mainstream” Republicans and all the Democrats will do anything in their power to make sure Wimpy doesn’t starve.

The late and lamented Ronald Reagan said we had to starve the beast. The problem is that these beasts are like cockroaches and won’t starve until Americans cut their heads off. Even then it might take a while.

This entry was posted on Friday, February 1st, 2013 at 10:04 pm and is filed under Politics. You can skip to the end and leave a response. Pinging is currently not allowed.