It’s January 18, 2009 and just two days until President-elect Barack Obama’s inauguration as the 44th President of the United States of America – or the coronation of Obama I, the Holy Emperor of America. 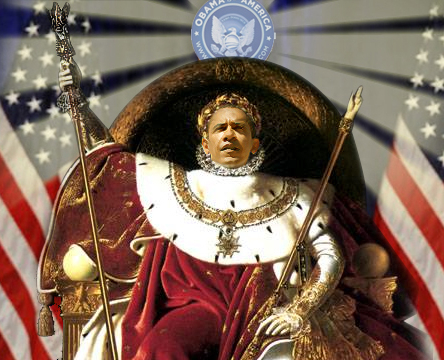 For the first time in the 220 years since George Washington’s inauguration as the 1st US President the clergy has anointed the the doorway through which the incoming POTUS will proceed with sanctified oil, marks of the cross, and prayer. Specifically they anointed the doorposts and lintel of doorway that Obama will on his way to the platform to be sworn in as the 44th President of the United States.

Anointing with oil is a rich tradition both in the Bible and in the history of the US Capitol. Oil symbolizes consecration, or setting something apart for God’s use. George Washington used oil during the dedication of the US Capitol. We used oil today to set apart the walkway and doors that will be the literal right of passage for Barack Obama as he ascends to the highest office in our land.

— Rev. Rob Schenck
President and co-founder of Faith and Action

I find these people’s action very disturbing. Is America inaugurating a President or coronating a King, Emperor, or Pope? The implications of this “literal right of passage” are profound – or would be if this behavior is accepted by the American people.

I’m sorry, but this consecrated gateway to set apart the inauguration platform “for God’s use” smacks heavily of Divine Right of Kings, something we turned away from in US over two centuries ago. I don’t really think that America needs to bring back the trappings of Emperor Charlemagne, King George III, or Emperor Napoleon Bonaparte.

I’m going to interrupt my own rant to state that there is no evidence linking Obama to this incident; the rite seems to have been performed without his consent or knowledge.

At this point in our nation’s life the American people are desperate for a leader, someone to take charge and – in the case of Obama – bring “Hope” and “Change.” That makes it absolutely the worst time in our nation’s life to do anything that expands the public’s view of the powers and duties of the Presidency. This is especially true when we’re inaugurating a popular and successful demagogue such as Barack Obama.

Dear readers, perilous times are upon us. It is not the cliff that we must fear; it is the small and measured steps into dissolution that we take all blindly and unknowingly.

This entry was posted on Sunday, January 18th, 2009 at 11:46 am and is filed under Politics, Religion, Society. You can skip to the end and leave a response. Pinging is currently not allowed.

5 Responses to “The Anointed One”