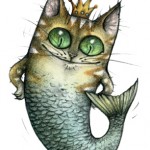 PETA has reached a new nadir in ridiculous behavior. PETA has decided that fish should be renamed “Sea Kittens” in order to indoctrinate children against eating them.

Our constitution guarantees their right to try anything of this sort that they wish to, but this idea exhibits a level of stupidity bordering on outright insanity.

In their own gibbering mouthings:

People don’t seem to like fish. They’re slithery and slimy, and they have eyes on either side of their pointy little heads—which is weird, to say the least. Plus, the small ones nibble at your feet when you’re swimming, and the big ones—well, the big ones will bite your face off if Jaws is anything to go by.

Of course, if you look at it another way, what all this really means is that fish need to fire their PR guy—stat. Whoever was in charge of creating a positive image for fish needs to go right back to working on the Britney Spears account and leave our scaly little friends alone. You’ve done enough damage, buddy. We’ve got it from here. And we’re going to start by retiring the old name for good. When your name can also be used as a verb that means driving a hook through your head, it’s time for a serious image makeover. And who could possibly want to put a hook through a sea kitten?

Thankfully our constitution also guarantees people like me the right to mock and ridicule the potentially dangerous lunatics at PETA. I say “potentially dangerous” because, it’s possible that these nutjobs could manage to achieve some of the ends to the detriment of civilized people everywhere. True, it’s highly doubtful since nobody with a functioning set of prefrontal lobes thinks of PETA as anything other than useful source of picture of naked celebrities, but it could happen and campaigns meant to brainwash our children are possibly PETA’s best chance at achieving their agenda.

So, to take a page out of PETA’s own playbook, let’s conflate sex with the topic at hand. This will serve the dual purposes of gaining a great deal of attention and making the Sea Kitten topic unsuitable for children in the minds of society. My outline of the basic concept of the counter-campaign reside below the break. It is NSFW.

Everybody loves a double entendre!  My idea is to use the obvious double entendre presented by the very name of the PETA campaign, Sea Kittens, as a method for its destruction. Going with that theme it seems equally obvious to use mermaids as the focal point for a counter-campaign against PETA’s juvenile brainwashing attempts.

Below are nine (9) images that should motivate people in the “proper” direction.

😆 I can already picture the t-shirts, panties, and more…

This entry was posted on Sunday, January 18th, 2009 at 6:14 pm and is filed under Society. You can skip to the end and leave a response. Pinging is currently not allowed.