Do You See The Problem? 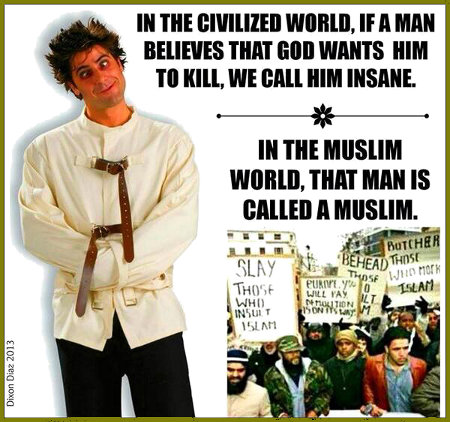 Do You See The Problem?

Despite the foolish apologetics of the Dhimmi Liberals and Progressives who side with Muslims against the Civilized World for two equally vile reasons, this is the truth. What is considered violently, dangerously, and criminally insane in the Civilized World is consider normal, right, and proper in the Muslim World.

Why Liberals and Progressives Side with Islam

Having seen the problem, we of the Civilized World must work towards a solution. Two pathways for solving the Muslim problem exist, which can be enacted in parallel. We can quarantine them so as to limit the damage they can cause to Mankind, and/or we can work against the more evil and dangerous Muslims while encouraging and fostering the good ones.

These same tactics should, out of necessity, also be used against Islam’s Liberal and Progressive enablers and supporters within the Civilized World.

This entry was posted on Thursday, September 11th, 2014 at 7:18 am and is filed under Politics, Religion, Society. You can leave a response, or trackback from your own site.