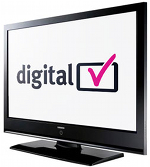 There’s been a fair amount of media coverage of- and hoopla over the Congressionally mandated switch over to all-digital television broadcasts within the US with its “drop dead” date for analog receivers being February 18, 2009. The oft-repeated message coming from both the US government and the television broadcast companies has been, “don’t panic.” There are many ways to keep millions of televisions in American households from going black.

I think its good that the US government and the television broadcast companies have both made sure that digital television antennas and analog-to-digital converter boxes are readily available to the households who don’t subscribe to cable or satellite TV sources. I also think it’s good that the US government and television broadcast companies doing what they can to keep this switch-over from becoming a cause for mass panic. We certainly don’t want the US public to fear that their television may be taken way 😉

But question remained floating around in my mind. Why is our government forcing this change to happen, and what is the US government’s “interest” in passing legislation to mandate the switch-over from analog to digital television?

Analog TV signals use the 700MHz (698 – 806MHz) frequency band, this means that by nature, they have a longer range than those frequency bands used by the wireless and electronics industries. Freeing the whole of that spectrum from television’s use could mean easier and cheaper deployment of broadband networks, which could translate to more affordable, widespread high-speed Internet access for consumers.

A portion (24 MHz at or near the upper end) of the 700MHz spectrum would also be set aside for police, fire, ambulance and other public safety responders who must rely on the analog spectrum to communicate due to its greater range and coverage.

By the time of the 2009 switch-over, the US government will have auctioned the remaining parts of the 700MHz spectrum to companies interested in deploying wireless technologies. The proceeds from these auctions are estimated at about $10 billion by the Congressional Budget Office.

This entry was posted on Thursday, December 25th, 2008 at 8:09 am and is filed under Politics, Technology. You can skip to the end and leave a response. Pinging is currently not allowed.

3 Responses to “Why Digital TV?”