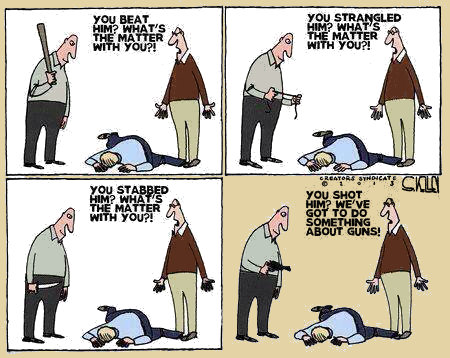 Whatâ€™s The Matter With You?

Isn’t it odd seeming that so many people living within America’s borders will place at least some of the blame upon the murderer if they kill someone by any other means than a firearm but, if the murderer did use a firearm, they place the blame on the gun and the murderer’s ability to possess it in the first place?

The logical disconnect is so broad and stark that it’s almost as if it’s not the murder that bothers them in the first place and that the gun grabbers want to disarm the American people for some other reason. That’s definitely something to keep in mind during the upcoming 2014 elections.

This entry was posted on Saturday, June 21st, 2014 at 9:00 am and is filed under 2014 Election, Politics. You can skip to the end and leave a response. Pinging is currently not allowed.