Understanding the race riots in Ferguson, MO is really easy. Even the shit show surrounding it is easy to understand. 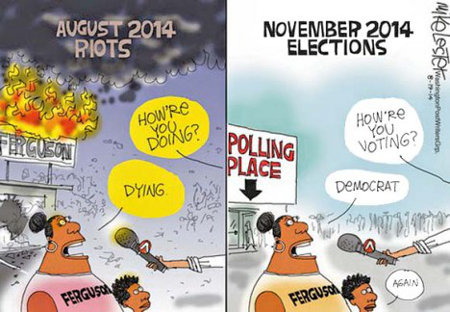 At the street level it’s very simple. Blacks have a tendency when concentrated together past a certain demographic point to engage in racial protests, rioting, looting, and general (un)civil unrest whenever they feel that one of their number has been harmed by a White, especially a White law enforcement officer. Such behavior is endemic to the culture of the “Black Community” and Americans are apparently supposed to excuse it due to there having been perceived to be a long history of white cops killing supposedly innocent black people and that this isn’t something Blacks can easily “get over.”

The Obama Regime’s injection of itself into a local matter is also very simple. Without ACORN, they have to use other means to “Get Out The Vote” among this key Democrat demographic. 😉

This entry was posted on Thursday, August 21st, 2014 at 9:33 am and is filed under 2014 Election, Politics. You can leave a response, or trackback from your own site.