They’re Not That Stupid

We Americans keep trotting out various iterations of the same argument to use against the gun grabbers. That argument being that laws only restrict the law abiding citizens since criminals, by their very nature, are not so restricted and, hence, gun control is foredoomed to failure. 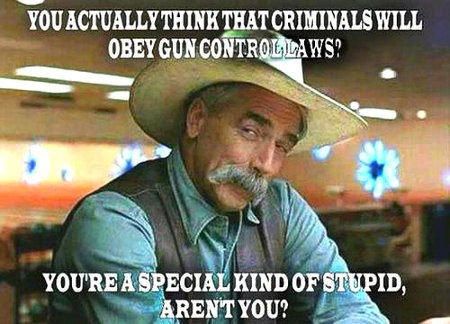 You’re A Special Kind Of Stupid, Aren’t You?

We may be the ones who are a special kind of stupid though for believing that the gun grabbers don’t understand this.

It’s not unreasonable to think that they’re not that stupid and, irrespective of what they claim now, will not be satisfied until they’ve completely disarmed the American populace, which would be the only way to eliminate firearms in the hands of criminals and the insane.

And, even if by some chance, many of them are that stupid. They won’t be satisfied with the resultant failure and will just progress from there towards universal firearm confiscation and disarmament.

So let’s consider that they’re not that stupid and choose not to be stupid ourselves.

This entry was posted on Sunday, December 16th, 2012 at 11:04 am and is filed under Politics, Society. You can skip to the end and leave a response. Pinging is currently not allowed.

4 Responses to “They’re Not That Stupid”