It may just be possible that Obama is resigned to being a One-Term President. Most incumbents actually seeking- and having some expectation of attaining reelection do not make public statements about how their families are “not invested” in their continuing in office past the next election, yet that is exactly what Obama has just done.

From AP via Yahoo News:

WASHINGTON – President Barack Obama says his wife and daughters aren’t “invested” in him being president and would have been fine had he decided against running for re-election. But he says they believe in what he’s doing for the country.

Asked about his family’s reaction to his wanting another term, Obama said: “Michelle and the kids are wonderful in that if I said, `You know, guys, I want to do something different,’ They’d be fine. They’re not invested in daddy being president or my husband being president.”

Of course, Americans could easily argue that Obama has no need – beyond any that his ego and narcissism might demand – to even attempt reelection, having already accomplished so much of what he set out to do. 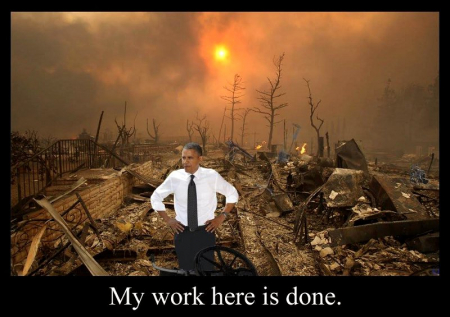 My Work Here Is Done

It would certainly be an easier and less stressful life for the Obamas if he got out of the White House as soon as was feasible, especially since the more nightmarish components of ObamaCare are set to “go live” in 2014, taking whatever is left of America’s economy down the drain. It be even easier and less stressful them if they got out of the country before then – potentially safer as well.

Personally I’m a traditionalist. I’d suggest that the Obamas move to Mauritania where they could live out their lives in the manner and style that they’ve become accustomed to. 😉

This entry was posted on Tuesday, June 14th, 2011 at 10:09 am and is filed under 2012 Election, Politics. You can skip to the end and leave a response. Pinging is currently not allowed.

One Response to “Obama’s Resignation”