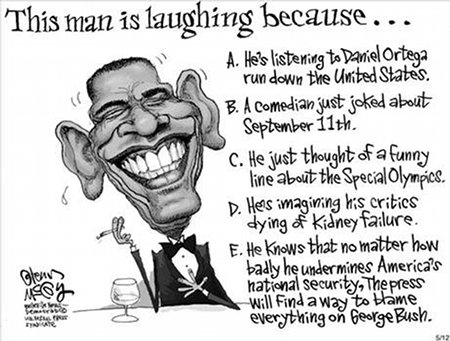 Glenn McCoy – Obama Is Laughing Because…

The again, Daniel Ortega running down America, Wanda Sykes joking about 9/11, and various Americans dying of organ failure are the sorts of thing that another large swath of the residents of America – Liberals and some minorities – do find hilarious, or at least worth a chuckle over a snifter of Cognac or Armagnac during the course of a well-heeled dinner party.

Also, anyone – myself included – would be laughing if they had President Obama’s power combined with his lack of accountability. The combination of probably not “being allowed” to be seen as a failure combined with a convenient scapegoat is a heady mix sure to bring a smile or chuckle to anyone in that enviable position.

This entry was posted on Wednesday, May 20th, 2009 at 9:12 am and is filed under Humor, Politics. You can skip to the end and leave a response. Pinging is currently not allowed.