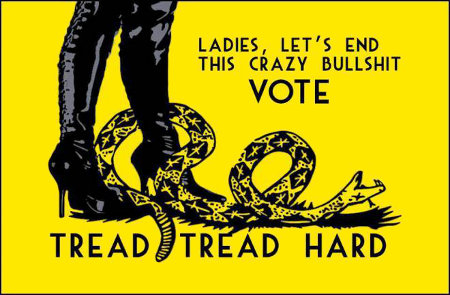 Feminists aren’t particularly associated with honesty. Much like discernment, honesty has never been a core value of feminism. That being said, some small number of the Toxic Wave Feminists are forthright and completely honest.

Remember this in the swiftly approaching 2014 midterm elections. The harridans of Feminism, unable to move their agenda forward any other way, desire to trample and tread upon every single Americans’ individual freedoms and liberties so that they can benefit from State-enforce equality of results and their own personal freedom from any negative consequences of their own choices.

This entry was posted on Monday, September 22nd, 2014 at 8:05 am and is filed under 2014 Election, Politics. You can leave a response, or trackback from your own site.