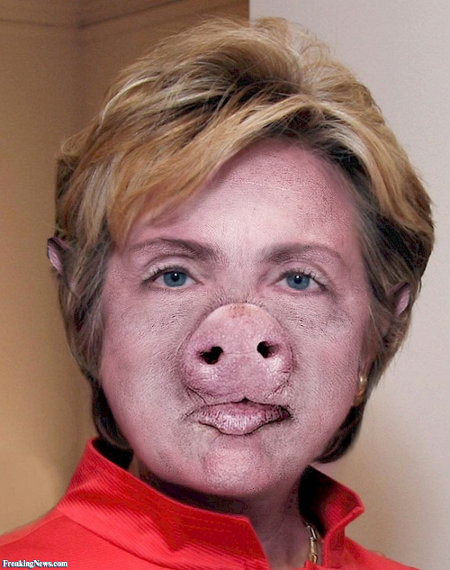 Fluttering around the background of both the Lamestream Media and the news sources on the internet is the ongoing scandal of Hillary Clinton violating various laws by using her personal email account and server to conduct State Department business.

The most recent bit of news is that it has finally been admitted that she illegally used it to convey classified material at least 25 separate times. How many times she actually did so in total is unknown because most of the emails had been deleted.

But, of course, there’s neither sign nor expectation that any serious sanctions or charges will ever be brought down up Hillary’s hoary head. Nor will the Lamestream Media hold Hillary accountable for her misdeeds.

Professor Jonathan Turley has described this as another example of Americaâ€™s Animal Farm system, in which all animals are supposedly equal but some animals are more equal than others. This seems an apt analogy and, given that, it’s more than obviously that Hillary Clinton is a pig – that particular breed of livestock that was more equal.

Yet sadly, there’s little to naught that we, the People can do about the special protections and entitlements that Hillary receives. In truth, though we all know that you can’t make a silk purse out of a sow’s ear, we’ll be damned hard pressed to keep our domestic enemies from making a POTUS out of a sow’s cunt.

This entry was posted on Tuesday, July 7th, 2015 at 2:34 pm and is filed under 2016 Election, Politics. You can skip to the end and leave a response. Pinging is currently not allowed.

One Response to “Hillary’s A Pig”