Despite the pressures of vacations, golfing, and attending fundraisers – the things that Obama should be kept at – the boy does find or make the time to address or, at least, speak about the grave threats that exist out there in the world. 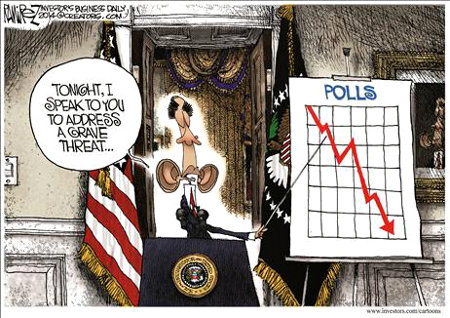 Of course, to Obama the grave threats are those which are threats to his ego and his legacy, which is indeed in grave peril when even Michael Moore has declared that the boy will only be remembered for being the First Black POTUS.

When the history is written of this era, this is how you’ll be remembered: He was the first black president. OK, not a bad accomplishment, but that’s it. That’s it, Mr. Obama. 100 years from now: ‘He was the first black American that got elected president.’ And that’s it. Eight years of your life and that’s what people are going to remember. Boy, I got a feeling, knowing you, that — you’d probably wish you were remembered for a few other things, a few other things you could’ve done. So, it is, on that level, a big disappointment.

The Obama’s handlers and overseers, of course, see this as a threat to the birth of the nation that they want to replace America with. Their token’s plummeting popularity bodes ill for their hopes and dreams.

The Congressional Democrats know and understand this threat as well. Their livelihoods are on the line with the 2014 midterm elections being right around the corner and their having, by and large, having sided and voted in lockstep with Obama. Hence, we can expect a lot of defections among their ranks and equally many claims that they’re now against Obama’s destructive policies and/or the boy’s at least equally destructive lack of policies.

Many Democrats See This Threat As Well

Our job as Americans is to not allow these Democrats to distance themselves from Obama and evade the just consequences of their allegiances and actions. In this case, they should not be allowed to choose between hanging separately or together; we need to make sure that each and everyone one them hang.

This entry was posted on Sunday, September 14th, 2014 at 9:34 am and is filed under 2014 Election, Politics. You can leave a response, or trackback from your own site.