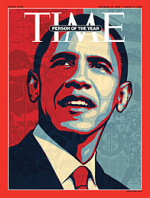 President-elect Barack Obama has been named Time Magazine’s Person of the Year for 2008 BCE. Kudos to Mr. Obama! He certainly deserves to be honored or acknowledged as the single most influential person in the world during 2008. From what I can see, only a fool would think otherwise.

According to Time Magazine – in one of the craziest elections in American history, he overcame a lack of experience, a funny name, two candidates who are political institutions and the racial divide to become the 44th President of the United States.

Time decides who – or what on occasion – to name as Person of the Year based on who they feel most affected the news and our lives, for good or ill, and embodied what was important about the year. So Person of the Year is an acknowledgment of power and/or influence as opposed to a ringing endorsement of any person’s qualities of character, wisdom or action.

Below is the complete list of Time’s Persons of the Year since the award’s inception in 1927. This is the powerful, though not nearly always illustrious company whose ranks Obama has now joined.

This entry was posted on Thursday, December 18th, 2008 at 10:46 am and is filed under Politics, Society. You can skip to the end and leave a response. Pinging is currently not allowed.