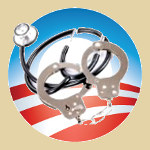 The shortage of doctors in America and both the impact that this will have on ObamaCare and the impact that ObamaCare will have on this growing shortage can only be resolved in one fashion – assuming, of course, that ObamaCare continues. The government must force medical professionals to accept any and all patients that the government decides upon. Nothing short of enslaving doctors to the will of the State will work.

This is also the only way to make a dent in the costs of healthcare in America. Stripping doctors of the liberty to decide upon which and how many patients to take on will allow the government to decide upon how much they will pay doctors for the services and what specific services, tests, procedures, and medications they will provide those patients.

The only questions are whether providing doctors to anyone and everyone is worth stripping medical professionals of the Constitutionally enumerated rights and which will be the next profession that the government determines must be enslaved for “general welfare.”

OK; there’s one final question – Why in the name of the Gods hasn’t the American people risen up, dragged any and all of the politicians who advocate this – and any families they might have – into the public square, and burned them to death?

This entry was posted on Sunday, November 3rd, 2013 at 7:00 pm and is filed under Ethics & Morality, Politics. You can leave a response, or trackback from your own site.