In 1822 AD Kenelm Henry Digby summed up chivalry in a most apt and succinct fashion.

Chivalry is only a name for that general spirit or state of mind which disposes men to heroic actions, and keeps them conversant with all that is beautiful and sublime in the intellectual and moral world.

And chivalry’s greatest lasting boon was always it’s idea of gallantry and courtliness, not it’s mandates for courage and martial ability. That a man be better measured by his comportment with women than his zest for battle is why the concept of chivalry lasted well into the 20th century. 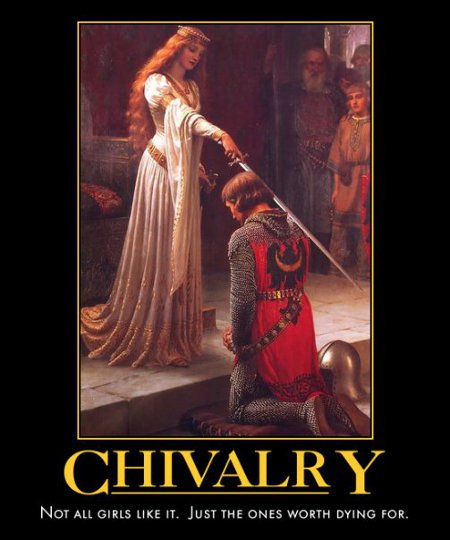 Chivalry Didn’t Die; It Was Murdered

The rise and inevitable corruption of Feminism killed off chivalry – or, at the very least, beat it into a coma from which it is not expected to awaken. The 2nd Wave Feminists viewed all examples of courtly behavior and gentlemanliness as examples of “The Patriarchy” and oppression.

There are, however, some few women who appreciate chivalry and who, by that appreciation, deserve to always be shown such. It is just a matter of finding them in latter cultural dark ages.

As for the others, these self-disgendered “womyn” – grant them their oft-spouted wish and let them look to themselves for succor, treating them no differently than any man who might take the field. 😉

This entry was posted on Thursday, December 8th, 2011 at 11:17 am and is filed under Society. You can skip to the end and leave a response. Pinging is currently not allowed.