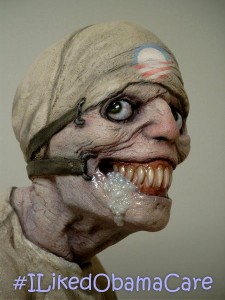 Supposedly ObamaCare was going to bring health insurance to the unwashed masses and go a long way towards fixing the economic issues linked to the high costs of medical care that Americans subject themselves to. It was, according to Obama and the Liberals who forced through Congress, going to insure the uninsured and lower most everyone’s health insurance premiums while allowing everyone who liked the current coverage to keep it.

So far reality has cruelly exposed all of this as lies.

In fact, so far and with ObamaCare still in its infancy, it really looks like every single bit of the GOP’s “fear mongering” has turned out to cold, cruel, hard facts, facts that will likely grow more dire as other parts of the misbegotten ObamaCare chimera are brought online.

By far the worst outcome and the biggest lie was that Americans could keep their health insurance. It is estimated that 93 million Americans – approximately 30% of the nation’s population – will lose their current coverage due to ObamaCare and either be forced onto the much more expensive and less useful health insurance exchanges or half to pay significantly more for their new, ObamaCare-approved employer-subsidized plans (Which are now considered federally taxable income).

Obama’s various mouthpieces might try to claim that the only people being negatively effected are those Americans already buying health insurance on their own – even that’s still almost 16 million people! – but that’s just another lie told in support of their earlier, bigger lie.

This entry was posted on Tuesday, November 5th, 2013 at 1:53 pm and is filed under Politics. You can skip to the end and leave a response. Pinging is currently not allowed.