Obama has, of late, been talking tough and making threats to act independently of Congress to enact his agenda for domestic policies through various executive orders. To many the boy is coming across as and angry, trash-talking would-be tyrant. To others, mostly those who believe they’ll benefit from his agenda, he’s likely coming across as a dynamic reformer who seeking to succeed despite the efforts of his – and theirs – avowed enemies. 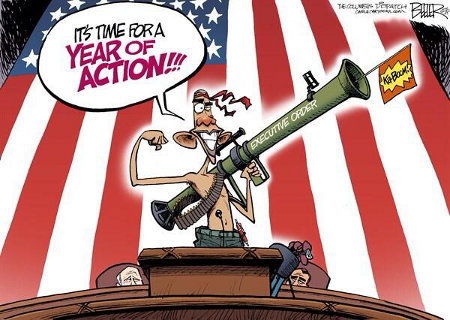 But the thing is that Obama may talk a lot and quite severely and defiantly, as if he strives to be the tyrant and take power and rule over America without interference from Congress, but his actions, or lack thereof, mean that this is just posturing – all presentation and little performance.

But then Obama has always talked like he wanted to turn longstanding traditions upon their heads as it were and create his own paradigm. In this case he just seems to be twisting President Theodore Roosevelt’s famed adage, “Speak softly, and carry a big stick,” into his own lamentable, “Speak loudly, and carry a small twig.” – at least when it comes to Executive Orders (EOs).

No, Obama doesn’t seem to actually be the type to stand up and openly defy both Congress and the constitutionally mandated Separation of Powers in order to achieve something…anything. At the very beginning he started out that way but one of his first EOs, directing the NIH to develop revised guidelines on federal funding for embryonic stem cell research, was overturned in federal court because it was illegal and he backed off on such things. Since then most, though certainly not all, of his EOs having been non-meaningful and within the limits the Constitution sets for his powers as POTUS.

The primary exception to this is the boy’s misuse of the War Powers Act to wage foreign wars at the bequest of foreign governments without the approval of Congress.

No, if Obama is a tyrant or would-be tyrant, he’s not going to be an open and honest one. His strong words are nothing but jabberings meant to inflame the Liberals and further polarize them against normal, mainstream Americans and the politicians that they elect to serve them. Instead, what tyranny the boy can enact will be performed without EOs and by various departments in the Executive, e.g., the IRS, the FBI, and the EPA and will be done in a manner that ensures that Obama has plausible deniability of any involvement.

Even this may be case of be giving Obama too much credit for planning and manipulation. His sin may be nothing but creating a climate of hyper-partisanship, intolerance, hatred, and desperation within the Executive – sort of a case of, “Won’t someone rid me of this meddlesome priest?” with the IRS, FBI, and EPA playing the parts of sirs Reginald FitzUrse, William de Tracey, Hugh de Morville, and Richard le Breton and American Conservative groups and businesses playing the part of the Archbishop of Canterbury, Thomas Becket.

This entry was posted on Saturday, February 1st, 2014 at 8:25 am and is filed under Politics. You can skip to the end and leave a response. Pinging is currently not allowed.