Unless the White House can coerce Congress to ignore reality and the law, next week may bring an unprecedented showdown: Congress holding a sitting US Attorney general in Contempt. The House Oversight and Government Reform Committee has already recommended that Attorney General Eric Holder be cited for contempt of Congress for failing to turn over documents relating to the Fast and Furious weapons sting operation. 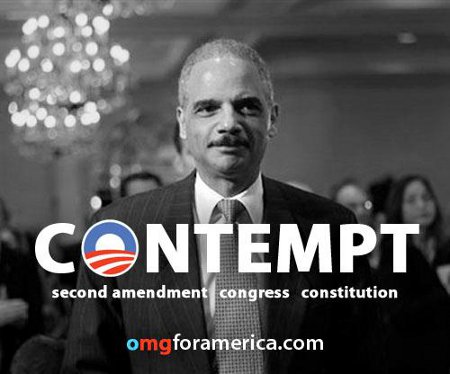 Irrespective Of Congress, Holder Is Held In Contempt

That’s good news, though there’s a plethora of other charges that should be brought against both Holder and Obama over Fast and Furious – capital crimes. It’s somewhat immaterial though.

Americans already hold Holder in the deepest contempt. The only real question is what we’ll do about him – and to him – if Congress fails to do its job through weakness or venality.

This entry was posted on Thursday, June 21st, 2012 at 8:30 am and is filed under Politics. You can leave a response, or trackback from your own site.