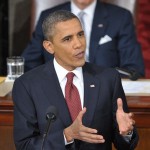 The Campaigner-in-Chief’s deficit might soon become a problem if it isn’t reined in very quickly and firmly.

No, not our nation’s deficit, which Obama has blithely hiked to previously unheard of and ruinously unsustainable levels in less than one term. His 2012 reelection campaign budget is his current problem, and it’s one deficit that he might actually care about.

The Obama Campaign spent more in May than it raised! The boy’s campaign and the Obama Victory Fund, a joint fundraising committee with the Democratic National Committee, raised over $54 million last month, but they spent $69 million, creating a $15 million deficit.

It seems that Obama and his handlers run a campaign in the same way that they run a government. 😆

This entry was posted on Thursday, June 21st, 2012 at 11:12 am and is filed under 2012 Election, Humor. You can skip to the end and leave a response. Pinging is currently not allowed.