For the most part the lamestream has industriously avoided providing any coverage of Ron Paul’s campaign in the 2012 Republican Primaries. Acknowledging Ron Paul as a statistically meaningful candidate was not something the MSM was willing to do. They barely even allowed him any time during the debates. 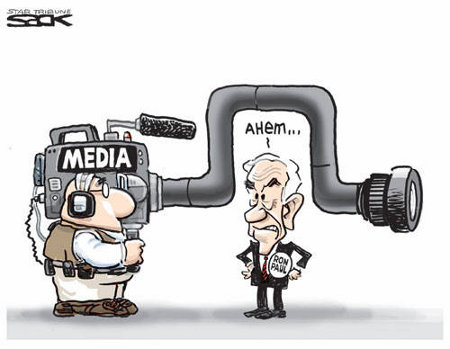 Of course the Leftists’ media outlets which make up the vast bulk of the MSM responded to Ron Paul’s refusal to disapear was much like their response to similar Conservative candidates who the MSM felt were a threat to their kingmaking agenda.

Unlike Herman Cain, the MSM didn’t drag up and sensationalize complaints of sexual misconduct from women of dubious credibility and less virtue. They dredged up cherry-picked sentences from decades of Ron Paul’s newsletters instead.

It’d be funny if the lamestream media’s continued existence wasn’t such a threat to America. Even with the clear and present danger they pose to America it’s still ironic that they rant and whine about bigotry when their political mantra is clearly, “Conservatives Need Not Apply.”

This entry was posted on Sunday, January 1st, 2012 at 9:28 pm and is filed under 2012 Election, Politics. You can skip to the end and leave a response. Pinging is currently not allowed.