It Had To Happen 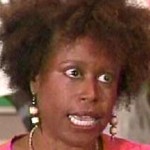 Anyone who keeps up with the radical fringe of politics had to expect the antisemitic, anti-American, crazed Socialist zealot and attention whore, Cynthia “It’s the Joos” McKinney to put down her crack pipe long enough to issue some jabbering rant about the violence that ensued when Israel was once again was forced to actively maintain it’s blockade of the Muslim terrorists in Gaza.

And, of course, she did mouth vitriolic comments and slurs to what few media shills were willing to still give her air time and/ or print space. Of course this time it was only little known of or listened to in the Western Civilization Russia Today’s American cell (RTAmerica) that bothered to record her drooling vituperation.

In some ways this is actually comforting; it’s good to know that some things will always remain the same.  Sadly though, it’s mostly the vile, the subhuman, and the outright disgusting things like McKinney that remain the same until finally purged from the body of America like a lump of shit.

This entry was posted on Saturday, June 5th, 2010 at 8:55 am and is filed under Politics. You can skip to the end and leave a response. Pinging is currently not allowed.