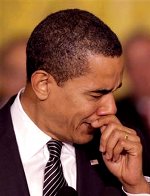 Back in October, 2002, when Barack Obama was a neophyte Senator from Illinois and attacking then President Bush’s attack upon the brutal and despotic regime of Saddam Hussein in Iraq, Obama said that  he wasn’t against all wars; he was just opposed to dumb wars.

Now, truth be told, Obama’s outburst had more to do with scoring political points by attacking President Bush then with any firmly held convictions Obama might have possessed, but his point about “dumb wars” had a certain validity.

War is a dirty, bloody, horrific enterprise that should be undertaken, when possible, only after careful planning and with a clear goal and a exit strategy kept firmly in mind.

It’s easy to argue that going into Iraq the second time was unneeded at that time, but harder to describe it as “dumb.” The operation was well-planned and we had clear objectives – though our exit strategy and the preconditions for such involved a time-frame that is largely unpalatable to the modern, “half-hour sitcom” format populace. It is also largely immaterial at this time; we’re pulling out of Iraq close to on schedule and the Administration that launched the war are no longer in power.

There’s a “dumb” war, if ever I saw one, and one that is growing more and more reminiscent of our protracted and ultimately failed engagement in Vietnam. What started out as a reasonably clear-cut punitive expedition by the US and NATO has become a quagmire.

General Stanley A. McChrystal, Commander of US & Allied Forces in Afghanistan, has pleaded for 40,000 more troops in order to prosecute the war there. President Obama and his administration seem very reluctant to provide those troops. The resulting schism between the US Military and the White House has become fodder for the media and various pundits.

For myself, I find this argument between the troops on the ground and the politicians in Washington D.C. to be ridiculous and a lethally stupid case of “putting the cart before the horse.” How can any decisions be made about the disposition of personnel and materiel before we have decided what the objective is?

What War Are We Fighting?

It’s rally a simple question and one that should have a relatively simple, if not necessarily easy, answer. I haven’t heard anyone – President Obama or Congress – provide that answer though.

President Obama, the Commander-in-Chief of the Armies of the United States of America, is required to answer those questions; that is his job. So far he hasn’t done so and every day our soldiers, allied Afghan militiamen, and even those who we’re currently fighting against are dying for no defined purpose whatsoever.

On one lone point I agree with what Obama said before he was elected President; I’m opposed to dumb war as well.

This entry was posted on Saturday, October 10th, 2009 at 9:36 am and is filed under Politics. You can skip to the end and leave a response. Pinging is currently not allowed.