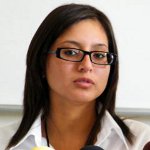 This entry was posted on Friday, March 4th, 2011 at 12:57 pm and is filed under Politics, Society. You can skip to the end and leave a response. Pinging is currently not allowed.

20-years old, mother of an infant son, college student and now Director of Municipal Public Security aka Chief of Police for the battle-torn Mexican towns of Práxedis Guadalupe Guerrero and El Porvenir, that describes the short and soon-to-be tragic life of Marisol Valles Garcia.

That she will end up raped, murdered, and dismembered is almost a foregone conclusion.

Chief Valles Garcia will be leading an amazingly courageous force of 13 agents, one working patrol car, three automatic rifles and a single pistol against the thugs of the Mexican drug cartels which war upon each other and the Mexican government’s forces for control of the area. Nine of her agents are women and will not be armed.

This young woman is amazingly brave, quite beautiful, totally committed to her people, and whole orders of magnitude better than the residents of the Mexican border state of Chihuahua can reasonably hope to ever deserve. But the cowards and filth in the Juárez Valley – who will still claim to be men – will sacrifice her and her family to the drug cartels while they hide in their hovels.

I very much do not look forward to reading about Marisol Valles Garcia’s rape and murder or to see pictures of her dismembered corpse; nor do I look forward to reading about what the Cartel thugs will do to her infant son. I fully expect to though unless something is done about the Mexican drug cartels – and I don’t see either Calderon’s failed government or the average pocho being either willing or able to do anything.

This entry was posted on Thursday, October 21st, 2010 at 1:41 pm and is filed under Politics, Society. You can skip to the end and leave a response. Pinging is currently not allowed.