And Sadly They Did 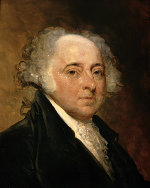 John Adams, the 1st Vice President (1789–1797) and the second President (1797–1801) of the United States of America, was that rarest of men, a man of both uncommon learning and forward-looking wisdom.

Adam’s was also possessed of a great deal of humility and piety, both rarities in politicians.

He was also, by all accounts, a loving husband and father. Therein lay the seeds of his soul’s disappointment.

Nowhere in his writings is this more clear than in his letter of May 12, 1780 to his wife Abigail:

The science of government it is my duty to study, more than all other sciences; the arts of legislation and administration and negotiation ought to take the place of, indeed exclude, in a manner, all other arts. I must study politics and war, that our sons may have liberty to study mathematics and philosophy. Our sons ought to study mathematics and philosophy, geography, natural history and naval architecture, navigation, commerce and agriculture in order to give their children a right to study painting, poetry, music, architecture, statuary, tapestry and porcelain.

than any hopes of Mr. Adams.

Across the span of generations the scions of America’s house not only did study those successively less practical arts and science, they reached the point where they denigrated the studies of their forbears – the farther back in the chain, the harsher the scorn.

John Adams set aside some measure of his sensibilities and proclivities and studied foundational arts and sciences so that future generations could study more genteel subjects – and sadly they did.

This entry was posted on Friday, April 27th, 2012 at 9:18 am and is filed under Politics, Society. You can skip to the end and leave a response. Pinging is currently not allowed.