Will Caterpillar, Inc. be the first of major manufacturing corporations to emigrate from the United States in the wake of ObamaCare? Or will they just layoff a significant fraction of their employees and cut salaries as much as possible in order to accommodate ObamaCare’s negative impact on their already weakened bottom line? 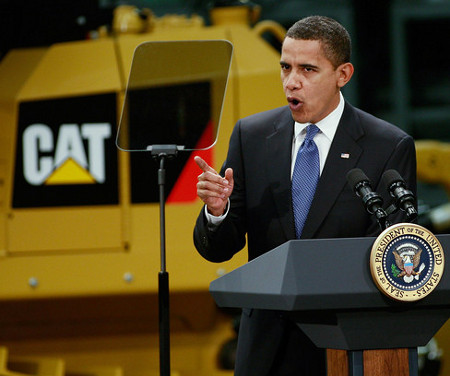 Caterpillar will, if ObamaCare is made the law of the land, be faced with significant increases to their labor costs in the form of increased mandatory health insurance benefits and increased Medicare taxes – amongst other new or increased taxes. This would make them vulnerable to their foreign competition such as Japan’s Komatsu.

Caterpillar Inc. said the health-care overhaul legislation being considered by the U.S. House of Representatives would increase the company’s health-care costs by more than $100 million in the first year alone.

In a letter Thursday to House Speaker Nancy Pelosi (D-Calif.) and House Republican Leader John Boehner of Ohio, Caterpillar urged lawmakers to vote against the plan “because of the substantial cost burdens it would place on our shareholders, employees and retirees.” Caterpillar, the world’s largest construction machinery manufacturer by sales, said it’s particularly opposed to provisions in the bill that would expand Medicare taxes and mandate insurance coverage. The legislation would require nearly all companies to provide health insurance for their employees or face large fines.

The Peoria-based company said these provisions would increase its insurance costs by at least 20 percent, or more than $100 million, just in the first year of the health-care overhaul program.

“We can ill-afford cost increases that place us at a disadvantage versus our global competitors,” said the letter signed by Gregory Folley, vice president and chief human resources officer of Caterpillar. “We are disappointed that efforts at reform have not addressed the cost concerns we’ve raised throughout the year.”

Business executives have long complained that the options offered for covering 32 million uninsured Americans would result in higher insurance costs for those employers that already provide coverage. Opponents have stepped up their attacks in recent days as the House moves closer toward a vote on the Senate version of the health-care legislation.

A letter Thursday to President Barack Obama and members of Congress signed by more than 130 economists predicted the legislation would discourage companies from hiring more workers and would cause reduced hours and wages for those already employed.

Caterpillar noted that the company supports efforts to increase the quality and the value of health care for patients as well as lower costs for employer-sponsored insurance coverage.

“Unfortunately, neither the current legislation in the House and Senate, nor the president’s proposal, meets these goals,” the letter said.

Caterpillar has already laid off 20,000 workers – 10% of the company’s regular employees and 8,000 contract workers – and froze the salaries of most of its remaining employees. They also took the sadly unusual step of significantly cutting the total compensation packages of executives and senior managers.

They don’t have much room left to work with, not if they plan to continue to base the manufacturing operations in the US. ObamaCare’s taxes, penalties, and employer-funded entitlements may be the straw that breaks the camel’s back and sends Caterpillar over the border or into bankruptcy.

If this happens, Caterpillar may be the first major manufacturer to emigrate its operations overseas in response to ObamaCare, but I doubt that they’ll be the last.

This entry was posted on Friday, March 19th, 2010 at 1:27 pm and is filed under Politics. You can skip to the end and leave a response. Pinging is currently not allowed.