Perez Hilton aka Mario Lavandeira is the latest thuggish agendist to try to (mis)use US Copyright Laws to silence criticism of his actions and agenda. The queer “media personality” is attempting to get an embarrassing video removed from YouTube, falsely claiming that it violates his copyright of the material.

The video that Perez is bothered by was produced by the National Organization for Marriage (NOM), a group that rather virulently opposes gay marriage. As part of the one-minute video is a three-second clip of Hilton calling Miss California Carrie Prejean a “dumb bitch.”

NOTE: I’m not sure how long this video will remain online. YouTube has a long history of bending over for homosexuals, Islamists, and other related groups who dislike Free Speech when it’s contrary to their respective agendas, so this video could be pulled at any time. I’ll try to find other sources for it if that happens.

Laviendra’s attorneys have issued a DMCA takedown notice over a TV ad posted to YouTube. YouTube, of course complied – but the video is viral enough that they’ve been, so far, unable to remove all copies of it from the site.

I guess that, since Lavandeira has decided to reinvent himself as a queer rights “activist,” he thinks that he has gained some form of entitlement. That’s abhorrent and pathetic since Lavandeira’s greatest claim to fame or celebrity – well, the greatest claim that can or should be mentioned in polite company at least; he might have others – was posting photos of celebrities – without permission from the copyright owners.

Lavandiera, of course, defended himself against the lawsuits that resulted by claiming that his defacement of the images with sophomorically crude scribbling of penises, cocaine, and semen on the subjects’ faces rendered his conduct Fair Use. 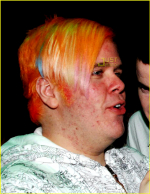 Does, in what passes for Perez Hilton’s deranged mind – AIDS Dementia Complex? – scrawling a few comments and/or crude and insulting graphics on an image is fair use, but including 3 seconds of video in a 30-second ad is copyright infringement? Most likely not.

Lavandeira/ Hilton is just another queer – though worse and more disgusting than most – who is more than willing to use any means available to damage and hopefully silence those who don’t “bend over” for the queer agenda in America.

I’m no great fan of the National Organization for Marriage (NOM), and they’ve in the past also over-utilized copyright laws against their detractors, but I certainly hope they use any and all means at their disposal to defeat and break Perez Hilton over this.

This entry was posted on Monday, May 4th, 2009 at 11:33 am and is filed under Society. You can skip to the end and leave a response. Pinging is currently not allowed.