In A Better Age…

They say that the only constant is change and, in one sad respect, they’re largely right. Unless society remains ever vigilant, basic mores and attitudes will devolve into horrendous caricatures of past glories.

As the venal and ultimately meaningless are some of the best indicators of societal devolution, one need only look to fashion and beauty norms for examples of this. 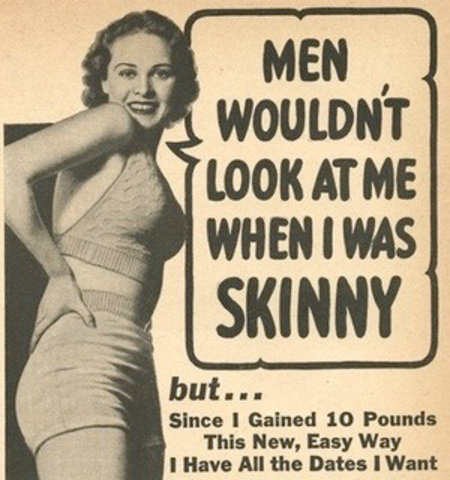 In A Better Age These Ads Worked

From the 1930s through as late as the 1960s ads like one above were common and successful. This is because American society still believed that women should look women as opposed to stringy, prepubescent boys with grapefruit stitched to their chests.

Note, however, that I describe that time as a better age, not a perfect one. Society was still placing too much value on female beauty and still demanding that women’s bodies fit into a certain mold to be considered beautiful. It was just a far more realistic and healthy mold.

This entry was posted on Monday, November 25th, 2013 at 10:57 am and is filed under Society. You can leave a response, or trackback from your own site.