Cleavage is absolutely and truly amazing. It has powers that border on the mystical and mythical. It both opens doors and closes them. Some even claim it causes natural disasters. 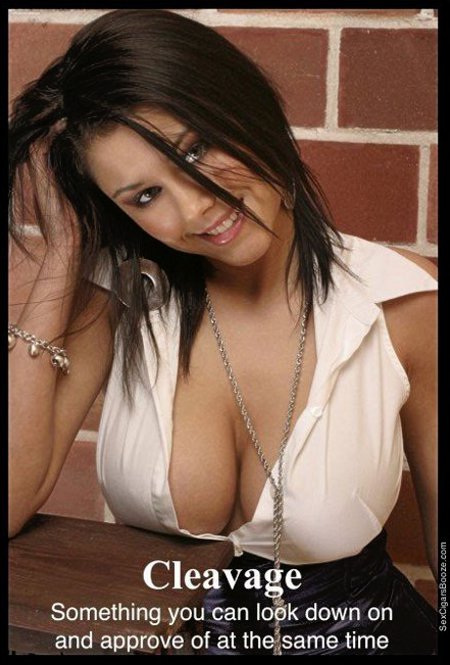 Never Has Something So Looked Down Upon Been So Approved Of

Immensely powerful and completely paradoxical, cleavage can bring a woman fame, infamy, or both at once. In some benighted areas of the world it can even get a woman exiled, imprisoned, mutilated or killed.

Behold The Power Of Cleavage

Even more amazing is that it forms the foundation of a plethora of multi-billion dollar industries which employ 100’s of thousand, if not millions of people across the globe.

Such is the overwhelming power of such display of the breasts that a hoax claiming that for men 10 minutes of staring at cleavage was equal to 30 minutes of cardiovascular exercise was widely believed in 1997, 2009, and again in 2009.

Has Sci-Fi been a prophetic force yet again?

Silly little planet. Anyone could take over the place with the right set of mammary glands.

It wouldn’t shock me in the least if the Earth could be taken over with right set of mammary glands if they were suitably and prominently displayed. I firmly believe that wars could be started or ended by cleavage and governments toppled.

Cleavage is absolutely and truly amazing. It’s the perfect synthesis of nature’s beauty and human ingenuity – and what else can you look down upon and approve of at the same time? 😆

This entry was posted on Tuesday, January 24th, 2012 at 11:51 am and is filed under Humor, Society. You can skip to the end and leave a response. Pinging is currently not allowed.