While any and all Americans can expect certain sorts of grifters, e.g., the Obamas, to lie and proclaim that the many and sundry Jihadis and Muslims terrorists aren’t Islamic, the rank hypocrisy and arrogant stupidity of the rank and file Liberals and Progressives is what is truly maddening. 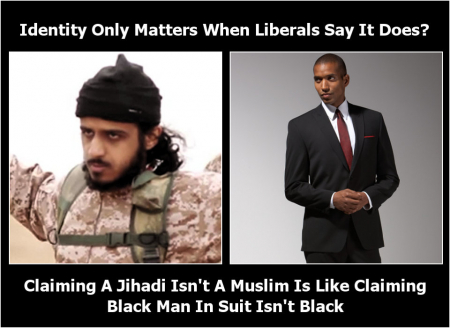 Worse, they don’t even see or hear their own hypocrisy; nor will they understand the allegory in the image above – though they will declaim me as racist anyway.

It’s a crying shame that they’re unlikely to ever be in a position to voice their views face-to-face with a jihadi. I’d pay good money to watch that and wouldn’t consider the jihadi’s response to be wrong in any way, though I might critique their technique.

This entry was posted on Sunday, December 6th, 2015 at 10:33 am and is filed under Politics, Religion, Society. You can leave a response, or trackback from your own site.