America in the New Dark Age of Obama is experiencing a bit of Change as Obama’s cultists Hope to remake the fabric America and further consolidate all power into the hands of the federal government. This, along with the new forces and powers available to the IRS has led to some unintended consequences. 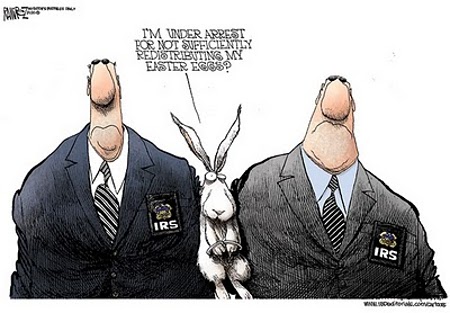 It makes a certain sense though. Obama and his minions would be highly unlikely to believe that the Easter Bunny, a mythic holdover from old Alsatian and Upper Rhinelander traditions brought to America by German immigrants during the 1700s, could be trusted to sufficiently and properly distribute his burden eggs.

Therefor the Obama regime, in the form of agents from the IRS, had to step in and ensure that all wealth or egg redistribution correctly followed the dictates of “social justice.” 😉

This entry was posted on Friday, April 2nd, 2010 at 4:18 pm and is filed under Humor, Politics. You can skip to the end and leave a response. Pinging is currently not allowed.