The Politics Of Identity

Sadly but not surprisingly, Identity Politics has been mainstreamed in America. Of course that means that what now passes for large swaths of American society has to politicize Identity, else they have know agenda that can be enacted. 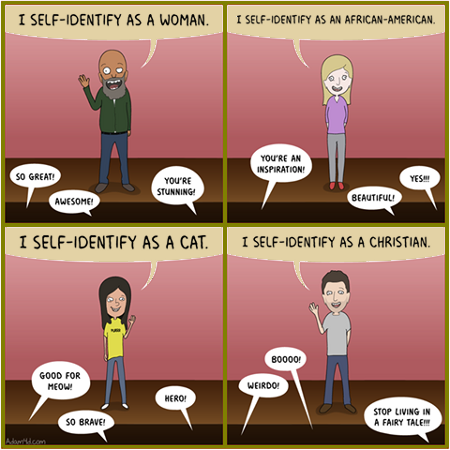 The Politics Of Identity

And, of course, not all Identities can be allowed to be equal. Some Identities, those that are normative or are associated with a long-standing moral thesis must be ridiculed, derided, and if at all possible marginalized in preparation for destruction.

So yes, there’s a war on Christianity in America. Our nation’s domestic enemies want to silence Christians by punishing them for adhering to their faith. In essence, the Liberals and Progressives, along with the various non-normal minority groups that they enable and pander to, want to replace freedom of religion – when and only when it applies to Christians – with freedom of worship.

The why of this is even more simple and horrid than the how of it. America’s domestic enemies want to change the very Identity of America.

This entry was posted on Sunday, February 28th, 2016 at 9:36 am and is filed under Politics, Society. You can skip to the end and leave a response. Pinging is currently not allowed.

One Response to “The Politics Of Identity”