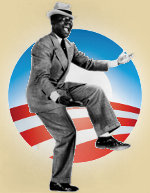 According the Obama Regime the (Un)Affordable Care Act aka ObamaCare isn’t a federal healthcare program and is therefor exempt from the laws that forbid rebates, kickbacks, bribes and certain other financial arrangements in federal health programs. Hence, Obamacare exchanges will be able to pay off medical professionals and insurance with impunity, there being – according to the Obama Regime – no judicial recourse.

This is much like Obama’s previous stances on whether or not the Individual Mandate was a tax.

The Obama Regime’s spurious claim that ObamaCare isn’t isn’t a federal healthcare program is ironic though. They’ve inadvertently told the truth about the (U)ACA for the very first time. It’s not a healthcare program of any sort. It’s a miscegenation of a federal power grab and a wealth redistribution scam. 😉

Then again, apply the law to Obama is inherently racist. Obama is a Black and almost all laws, after all, disproportionately effect Blacks. Also, expecting better behavior from Obama than he has displayed is equally racist as it ignores and/or deprecates grifting, shuck and jiving, and tap dancing which are all parts of Black Culture.

This entry was posted on Sunday, November 10th, 2013 at 11:59 am and is filed under Politics. You can leave a response, or trackback from your own site.